Stephanie is inherently a framework using different components to engineer the working of the application. It is built with the thought of providing all the developers a way to build their own modules with minimalistic configuration and convention. By following certain rules and convention anyone can write his own modules to extend the functionality of stephanie and make it a little more personally trained for your own use.

For all the non-programmers who have an interest of programming, I am working on a new section which could help people to learn programming interactively while extending the functionality of Stephanie.

With a little knowledge of python (programming language), anyone can write his own modules with simplistic API that stephanie provides.

In this section, we’ll give a quick overview on how should a person go about writing his own modules with a toy example, after that we will explore the entire API, to understand how to build more advanced modules, which could act as a completely new application and at the end a few tips will be provided to make sure your understanding matches with the practical implications. 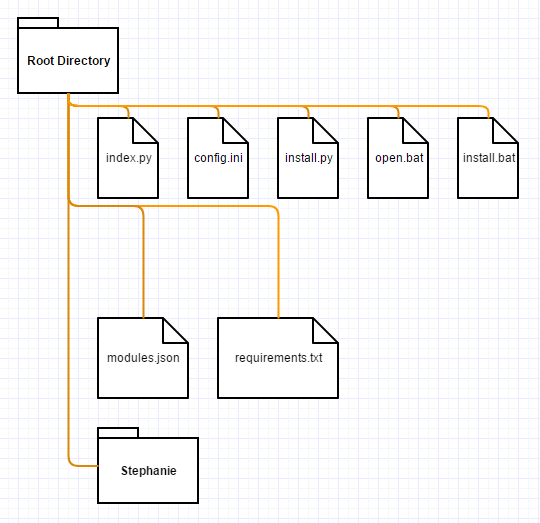 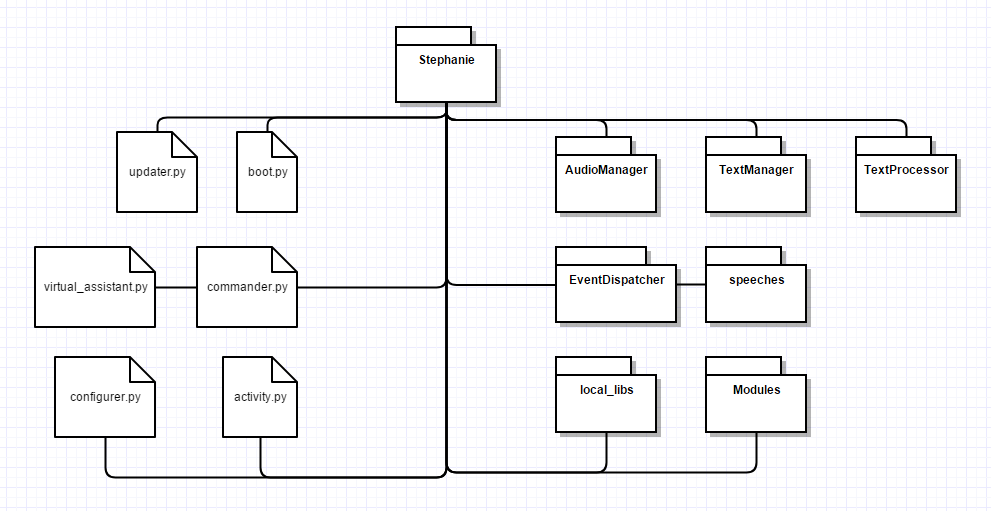 This is the place where you’ll spent most of your time in, by extending functionality of existing modules of stephanie or adding absolutely new ones. So let me give you an example by writing a simple module and navigate through the steps you need to perform in order to make it working.

Stephanie follows PEP8 conventions whenever possible, and is completed Object Oriented, let me show you how to go about it.

Go on and create a file called test_module.py in the modules directory of stephanie.

Create a class called TestModule in that file like so : (in test_module.py)

The resources you are provided with through dependencies handled by the parent class, “Base Module” and their functionality.

Some basic textual resources to get you information about why you’re module was triggered. these are basic properties of the parent class, and are accessed with

Assistant object is a wrapper around AudioManager, TextManager and TextProcessor which has various methods interconnected to create a Fluent API.

say(text) - (parameter: string, returns: void) Whatever string is given to the method, gets outputted in the audio format.

listen() - (parameter: void, returns: self) Records the audio in memory and returns itself. (the very own instance, “self”)

Assistant has property called events which handles events happening all around the application, wake_up_engine, quitting application are one of the few applications of it.

I’m not too sure to cover it up in this version of stephanie, since a little more thinking needs to go in there to make it’s usage simpler. But you can take a look at the code, as you’ll see it’s nothing too complicated, but a bit complex.

Coming Soon. (And there are some other bunch of methods and properties present in assistant which you wouldn’t need to worry about as they are available to you though the wrappers provided above, but if you are feeling a bit adventurous that sure enough you can use them straight out of box or create your own implementation.)

Config object is a wrapper around Configurer class of configurer.py which is responsible for handling configurations obtained from config.ini file. You don’t really need to use it in raw format, since a method is available in parent class called get_configurations which is a handy implementation to get any kind of configuration.

If you look at config.ini file, it has sections and subsections like so.

So here, sections are USER, MODULES and so on, while keys are name, age, wolframalpha_search_engine_key and so on.

Stephanie can be used to build a lot more complex applications by nesting modules, enabling scope of the stephanie’s decision to lower form and hence improving it’s efficiency and even separating different domains from one another, one clear example of it is found in FootballModule because of it’s large complexity.

So as always you can take a look at the code written for football_module which involves local_libs to organize code neatly and separate core logic with business one, But let me show you another example, to get you a better and clearer understanding.

Just like in Getting Started section, we will first define a module, let’s call it chat_module.py and prepare the class like last time as follows:

Stephanie provides a really easy integration of 3rd party modules, and if you have created your very own module and would like to share with the other community, then please do. like really Stephanie is nothing without the community’s support.

And it’s the modules built by developers like you which could let Stephanie grow as a community, the guidelines are pretty simple.